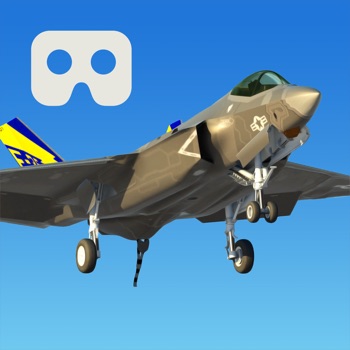 Challenge yourself to fly and land an F35C on the USS Gerald R. Ford! It's every pilot's dream!

F35 Carrier Landing delivers near 100% simulation of the aerodynamic behavior of F-35C LightingII the first Stealth fighter of US NAVY. In the game, aircraft control is using an FBW system (Fly by wire flight control system) which is widely used by modern military aircraft. We use the most advanced flight control algorithms to implement the flight control system, as much as possible under existing references. With 100% real landing gear dynamic calculations, you can see in the preview video that touchdown dynamic performs very close to real video footage. We also implemented arrest wire dynamic simulation, which is not seen even in high-end PC flight simulation games. The game also supports screen recording(iOS 9 or later) so you can share your precise flying skills.
In future updates, more carriers and carrier-based aircraft will be added.
Enjoy the game that's the closest to a real military flight simulator.

Due to the game's high-precision models and high-quality textures, please make sure your device meets the minimum requirements:
>>MINIMUM DEVICE REQUIRED iPhone 5s<<

- Added new aircraft A7E
- Added the volume control option
- Enhanced the sound and effect of gear touchdown
- Enhanced gear damping
- Increased angular velocity inertia calculation to simulate inertial coupling effect
- Modified the data of dynamics components of F-35C, the simulation is more real
- Relaxed the F35C's AOA limitations, there will be more fun flying this aircraft
- Modified the operating area and operating range of the rudder pedal
- The operation method of speed brake has been modified
- Fixed the problem of meatball accuracy
- Fixed a problem in the cockpit sound playback incoherence
- Improved navigation point calculation
- Level will not be finished automatically after landing if you want to view final score you have to select Finish Level in the pause menu manually​
- The rudder damper use a new algorithm, now the rudder is much easier to manipulate, especially when landing with crosswind