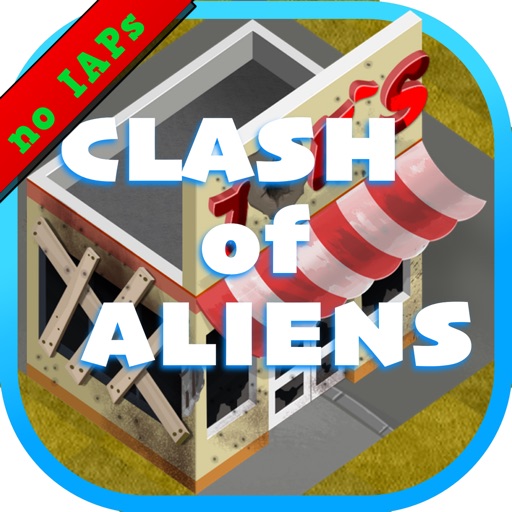 Clash of Aliens is a Premium Empire Builder with Innovative Battle System! Without In-App-Purchases and Waiting Times. As a bonus we provide you Stickers for your iMessage conversations!

- Innovative Battle System: YOU are the LEADER!
1) Separate your army in up to 4 different squads
2) Place your squads
3) Command every squad individually

- Fair for everyone!
1) No In-App-Purchases
2) No Gems
3) Build your empire and army WITHOUT waiting times

- Multiplayer!
Attack players from all over the world and use the loot to build your empire even stronger

- Buildings!
Build the city of your dreams WITHOUT waiting for days or spending any additional money

Press:
"Clash of Aliens delivers exactly what commenters are always asking for: It's got empire building gameplay, with a multiplayer battle system, and no timers or IAP at all. Instead, it's a single $1.99 purchase."
- TouchArcade, 2017-03-30

"For just $1.99 and no further in-app purchases, you can enjoy a good strategy mobile game and not have to wait tremendous amounts of time for your units to be created and deployed and so on. After a quick look at the game’s trailer, you will probably realize that the almost 2-dollar price tag is a bargain, judging by the fact that it keeps all the best elements of similar games, while taking out the tedious and much-hated timers. Unfortunately, the game has seen little traction since its launch, but here’s to hoping that will change soon, because ‘Clash of Aliens’ is a mobile game that is truly worth trying out. And, when considering that the developers gave fans exactly what they wanted, it’s an even bigger shock it hasn’t broken the Internet yet."
- TNHOnline, 2017-04-01

"Clash of Aliens, the new strategy game, offers empire building gameplay, multi-player system, no timers and most important of all – no IAP! All said and done, those who are in for no-hassle, no-headache, one-time-pay kind of games will definitely like Clash of Aliens. No-IAP and no timer-based games have their own secret admirers!"
- MobiPicker, 2017-04-02

Optimized for the new iPhones (iPhone XR, iPhone XS and iPhone XS Max), for the new iPad Pro as well as iOS 12!
NEW Sticker for even cooler iMessage conversations!
Have fun playing!