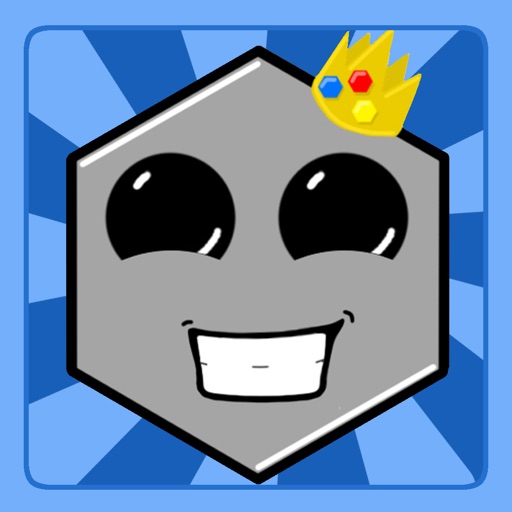 RYB Board Game is a fun and competitive game about strategicly using colors and numbers to outwit your opponent and conquer the hexagon board.

Test your mind against players all over the world in this fast, 2D, strategy board game. Using a combination of Highest Number Wins and Rock-Scissors-Paper(Red-Yellow-Blue), capture your opponents hex tiles and take over the board, one turn at a time. But with just 9 moves each, any game can quickly go from victory to certain defeat.

If you are short on time and want a quick match, then play against the AI at three different skill levels and for an addition challenge, add a turn timer to your match. Or if you are sitting on a bus with a friend then play a match against them using just one device.

Rules:
RYB Board Game is played on a hexagonal board, which is made up of 18 smaller hexagons. Each player starts with 9 tile pieces: three Red, three Yellow and three Blue. On each tile is written a number which represents its attack power, for each color there will be one labeled "1", one labeled "2" and one labeled "3". The goal of the game is to try and capture all of the opponents tile pieces by placing one of your tiles with a higher number against an opponents that has a lower number. But the players must be cautions with which pieces they put next to each other as some get an increase in their attack power when going against certain colors:
-Red Tiles get a +1 against Yellow Tiles.
-Yellow Tiles get a +1 against Blue Tiles.
-Blue Tiles get a +1 against Red Tiles.

During the game, the two opponents take turns to place one of their tile pieces onto the board. Once placed, the piece can no longer be moved. One player "White" has pieces with a white edge, the other player "Black" has pieces with a black edge around them.

If you wish to increase the challenge then try implementing the turn time limit, which will result in a loss for any player who does not place a tile piece down on the board before the time reaches zero.