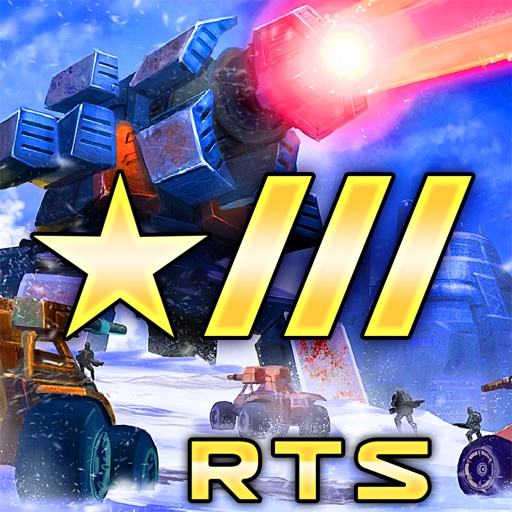 "It’s fun, challenging, and awesome all bundled up in one game." - AppModo

"This game is the SimCity of strategy war games... go get it now!" - iPhone Life Magazine

Dominate in this real time strategy game! Fortify your base with turrets, surface to air missile launchers, torpedo launchers, and long range cannons. Next create factories to pump out legions of vehicles, aircraft, and ships to wage war with, you decide what to build. Form groups and transport units to prepare for an assault on the enemy! Finally execute your strategic battle plan and enjoy the immense carnage that ensues. With unique explosions, wreckages, sound effects, and animations for every unit the carnage is as beautiful as it is deadly. Discover and mine unique resources to build gigantic mega units which can turn the tides of war instantly!

As the commander of a massive war campaign you can navigate stealth aircraft and submarines on recon missions, airlift units into the fight via helis, scout tread marks left by enemy tanks to their base, and hide under trees for an ambush attack. You can expand your city with over 100 structures and units to choose from. As your empire grows you can research technologies to guide the focus of your strategy. Dominate on all types of terrain, send aircraft to bombard the enemy to weaken its infrastructure, control the shores with a naval fleet of ships and subs, and transport units into the fight to finish the mission! You can even manufacture and launch game changing weapons such as ICBMs.

LASW features a random map system so every game is unique. There are several victory types and settings to customize the game and provide fresh missions. If you like Command and Conquer Red Alert, War Commander, Valor, The Settlers, Starfront Collision, Age of Empires, Starcraft, Warcraft, Warfare Incorporated, Total Annihilation, and Supreme Commander you are going to love this RTS game!


"Other RTS games have used such a squad system, but few execute it this well. Launching pincer attacks is quick and easy to do, with units responding without fuss to your commands." - Pocket Gamer

"If you're already a big RTS fan, I'll offer you this advice – go buy this game right now. You need it. You'll love it. It's a truly excellent single player RTS affair." - Touch Arcade