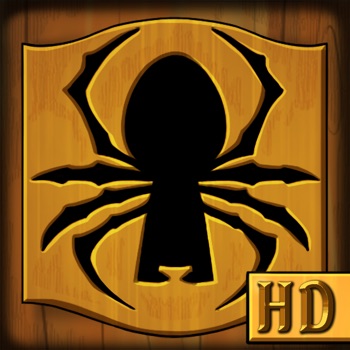 Praise for SPIDER: THE SECRET OF BRYCE MANOR:

“There’s really nothing as uniquely rewarding as tackling a hornet out of the air, or spinning an eight-point web.” - Slide To Play

“One of the most wonderfully natural and intuitive control schemes" - AppGamer

"Spider's soundtrack deserves to be on iTunes -- it is astounding." - IGN

You are a spider. One afternoon, you discover an abandoned mansion. Where is the family who lived here? What happened, and why did they leave? Search for clues as you adventure from room to room on the hunt for your next meal. Build webs of your own design: in the corners, under the furniture, and in the forgotten places too small for humans. Are you a shrewd enough sleuth to decode the mystery and uncover the Bryce family secret?

* FULLY OPTIMIZED FOR THE iPAD
- The definitive version of Spider; includes the entire “Director’s Cut”.
- Only on the iPad: “Sidekicks” co-operative multiplayer!
- One of the iPhone’s most original and beautiful games, now in glorious high resolution.

* DRAW WEBS WITH YOUR FINGER
- Touch to walk, swipe to jump, and build webs by drawing shapes in the environment.
- Powerful, intuitive controls; easy to pick up, challenging to master.

* SEE THE WORLD THROUGH THE EYES OF A SPIDER
- 38 beautifully hand-illustrated levels to explore
- Hunt your insect prey, leaving Bryce Manor covered in cobwebs!
- Search for family secrets in the shadowy basement, beneath the floorboards, and in the darkest corners.

* CONQUER UNIQUE ACTION-PUZZLE CHALLENGES
- Use instinct and guile to track down an assortment of tasty insects.
- Tackle hornets, herd mosquitoes, stun dragonflies, attract moths with light, and more!
- Plan your meals wisely! Run out of silk and risk your demise.

* HOURS OF CAPTIVATING GAMEPLAY
- 5 game modes offer limitless depth: race against time in Feeding Frenzy, solve the puzzles of Precision, and survive the intensity of Hunger Mode.
- Earn 48 challenging Achievements including Linebacker, Gaping Maw, and One Fell Stroke.
- Compete with the world on the Spider global leaderboards. Spin together massive combos to get the highest score!

* SIDEKICKS: THE UNIQUE NEW MULTIPLAYER MODE
- Team up with a friend to explore Bryce Manor!
- Build webs together and share your meals to survive
- Climb the leaderboards with crazy combos, shared webs, and airborne high-fives!

If you like Spider: The Secret of Bryce Manor HD, you'll love :