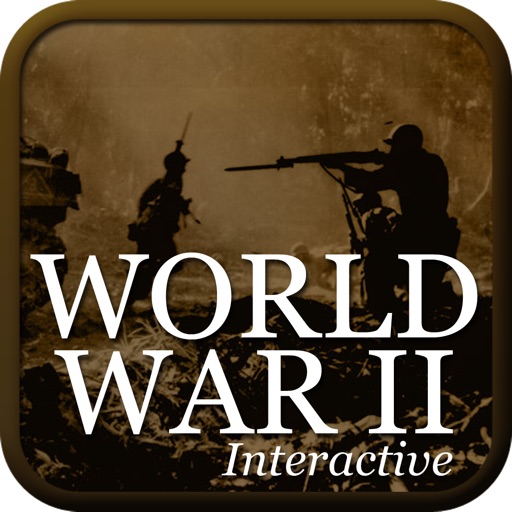 Rated as one of the best iPad Apps by Gizmodo.com (one of the biggest tech blogs).
A very comprehensive App on World War II made specifically for the iPad. Brings World War 2 alive on your iPad screen. World War II Interactive covers the biggest conflict in history with stunning photos, videos and speeches and amazing design.

"If you’re a WWII enthusiast, we say go for it." - Aayush Arya, Apps Co-Editor at TheNextWeb.com

"What's especially great about World War II Interactive is that the app provides you with rare pictures and videos you've probably never seen before. The quality of the content is really good too—for those who don't like history, I think it makes it interesting enough with multimedia to keep you interested." - Gizmodo.com

- A visually engaging and highly atmospheric overview of World War II, including the runup and the fallout. Powerful capsule history of World War II, chilling and reflective in one breath. - Kirkus Reviews

"World War II Interactive is a should buy for the price that is a great resource for everything World War II, which takes full advantage of the iPad platform over a standard hardback book." - From review by Applenapps.com (rated 4/5)

"If students are studying World War II, this app is an amazing resource. The format of this app and the content included will definitely keep kids involved and engaged. - AppoLearning.com (Rated 89/100)

"This app is very useful for everyone that has an interest in the subject or for all middle or high school kids studying WW II at school." - FunEducationalApps.com

Read about the major battles and events of WW2 in detail. Swipe through the timelines for every month of the war. Watch rare video clips. Listen to famous speeches. See amazing photographs. Learn about the leaders, weapons, conferences, major operations, etc. More details about these are mentioned below.

Benefits:
- Ideal for anyone above age 10: kids, adults and WWII enthusiasts alike.
- Far better than reading a book. Spend hours with it.
- Gives you a complete overview of World War II.
- Doesn't overload you with unnecessary extra information.
- Beautifully designed with visuals and sounds.
- Very easy to navigate, use, read and understand.
- Features a complete index making it easy to jump to any section at any time.

You can see a video demo of the app at http://www.worldwar2app.com

----------------More Details---------------
Topics covered:
The App is divided into 9 periods: Events leading to the war (1918-1938), the 7 years of the war (1939-1945) and events after the war. All the major battles and events (from every theater of the war) are summarized in detail. Topics covered include Rise of Hitler, German Blitzkrieg, Winter war, Battle of France, Dunkirk, Britain, North Africa, Operation Barbarossa, Pearl Harbor, Holocaust, all major battles of Pacific war theater, D-Day, Burma, invasion of Italy, Germany and Japan, atomic bombings, etc. and many more.

Timelines:
8 extensive timelines for the events during 1918-1938 and in detail for every month of the war from 1939 to 1945. Tap on the timeline to learn more about the person, weapon or event mentioned.

Videos:
More than 35 rare video clips of major battles, airplanes and events including
- Adolf Hitler in Paris
- Pearl Harbor bombing
- Battle of Stalingrad
- D-Day landings and Battle of Normandy
- Atomic bombing of Nagasaki
- The Japanese surrender ceremony aboard USS Missouri
- and Many More.

Immerse in World War 2 like an active participant and emerge victorious with the Allies once again.
Do like the app on http://www.facebook.com/worldwar2app

We have brought the World War 2 in this new generation just for you. So gear up and get ready to go on an adventurous ride with us.