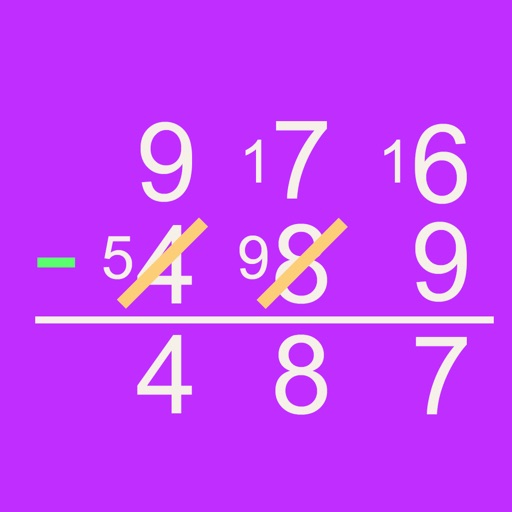 This math app can be used to teach and study the equal addition subtraction method. The user can solve random or custom subtraction problems with small and large numbers. The number of digits in the numbers can be set.

Tim Pelton, assistant professor of Mathematics Education at the University of Victoria, reviewed the Column Subtraction app (that is very similar to this app) and wrote:

“With the ‘show current operation’ option turned on, they are constantly reminded of the next step, which can lead to efficient practice of the procedure. Then by turning off the current operation your child is able to practice remembering the steps on his/her own. Because no wrong entries are allowed the app provides a passive form of positive reinforcement and your child will likely improve in both confidence and competence with respect to the procedure.”

iDevBooks math apps have been reviewed and endorsed by Wired.com, IEAR.org, Edudemic.com, Teachers with Apps, and other respected sites and organizations.