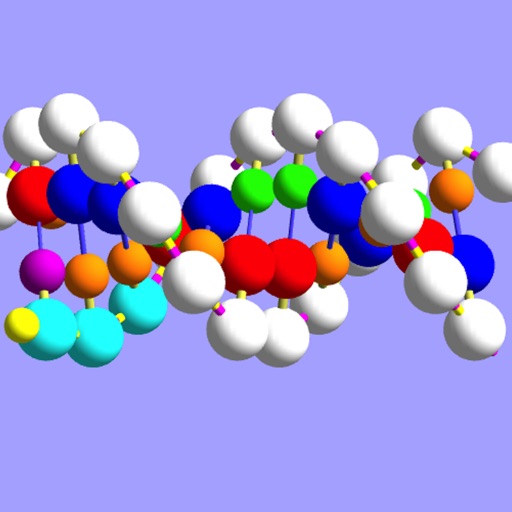 "Just like the other apps by this developer, the OnScreen DNA Replication app is incredibly educational and fun to use." Genetic Engineering & Biotechnology News, July 2013

See a 30-second preview video at nondummies.com. We know of no other simulation, app or internet, that shows what happens in DNA replication as thoroughly as this app does.

OnScreen DNA Replication shows all of the several steps (indicating the corresponding enzymes responsible for those steps) necessary for one double helix to become two identical to the original. Through the use of engaging 3D animations with a virtual double helix model (not a 2D ladder) it makes clear and memorable how DNA daughter strands are constructed nucleotide by nucleotide in replication.

Students from middle school on up can learn from the app, as no advanced knowledge of chemistry is assumed. The model is exactly the same as the one found in OnScreen DNA Model, a companion app that teaches the structural details of DNA, and in OnScreen Gene transcription, another companion app that shows how protein recipes are copied into messenger RNA. Detailed commentary on what the animations demonstrate in each step is available in a popover view, and a wealth of background material is to be found in a "Useful Stuff" popover.

The sequence of events in DNA replication unfolds in three-dimensional simulations that don't skip over the need for unwinding the DNA after the strands have been separated. The formation of a hybrid DNA-RNA double helix during the first step of primer RNA construction is correctly shown. DNA and RNA nucleotides are seen to move into place and then form hydrogen bonds with their base-pair mates in the template DNA strand. Important details about replication that are often given short shrift or omitted altogether, such as the essential role the enzyme pyrophosphatase plays in the cell, are included.

The concepts of leading and lagging strands and what the Okazaki fragments are and how they are constructed and then joined together through the actions of various replisome enzymes are made clear and memorable through the three-dimensional simulations in the Model View and the representations of enzymes in the Sequence View.

The "end problem" of linear DNA strand replication is not swept under the rug as often happens. Instead, the basic principle of how the enzyme telomerase uses its own RNA to extend the lagging DNA strand by means of reverse transcription is illustrated using simple models with only the RNA and DNA showing.

Set the simulation to pause after each new significant step or pause it only when you want. Commentary on what is happening is literally at your fingertip in a popover. Rotate, translate, or zoom the model during the simulated replication for a better view just by finger slide gestures.

The ball-and-stick model has the advantage of clarity at the expense of atomic detail. The replisome enzyme complex, while not shown in the view with the DNA model, so as not to obscure what is happening with bonds and strands, is depicted in the Sequence View below the model, thus making the point that it moves along the DNA, as it initiates and controls the reactions in replication. Furthermore, the actions of the individual enzymes that make up the replisome are also indicated in the Sequence View.