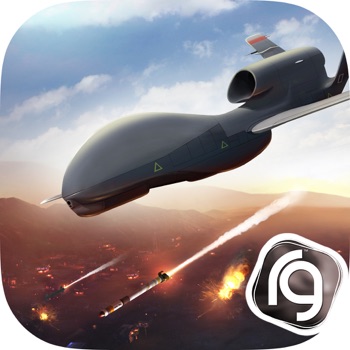 Drone Shadow strike is the most epic military warfare game that offers an addictive mixture of strategy, fast-paced combat and real action! Operate the world’s best UCAVs with an arsenal of weapons and bring the rain!

Set in the heart of covert aerial warfare, with real world inspired immersive environments and the original FLIR (Forward looking Infrared) camera, the game puts you in the hot seat of a special ops operator. You must work your way up the chain of command over a series of covert missions, using ultra high tech equipment, strategy & skills and superior firepower to lay waste to the enemies of the state, all at the tap of your fingertips!

Reaper, evade enemy fire and raid their bases before they take you out. You are clear to engage!

The game is completely free to play but some in-game items require an in-app payment. You can turn off the payment feature by disabling in-app purchases on your device.

Exclusive Features:
•Fly 8 different types of UCAVs, from prototypes to official in-service aircrafts!
•Defend, Survive, Strike or Escort; 34 missions in 5 real world inspired campaigns.
•Cannons, Guided Missiles, Rockets & Bombs; 4 types of weapons, 25 ways to light ‘em up.
•Superior upgrades. Choose to be light & stealthy or loud & proud!
•7 Additional enhancements. Dominate the battlefield with airstrikes, nukes & more!
•Simple and easy intuitive touch controls, command the battle with just a fingertip!
•Fight alongside friendly AI forces. Provide overwatch and protect them at all costs!
•20 official Ranks. Start as an Airman Basic and rise up to command as a Master General.
•Over 282 Challenges & 70 Achievements.
•Compete with friends and others around the globe via Facebook & Game Center leaderboards.
•More campaign episodes to come.