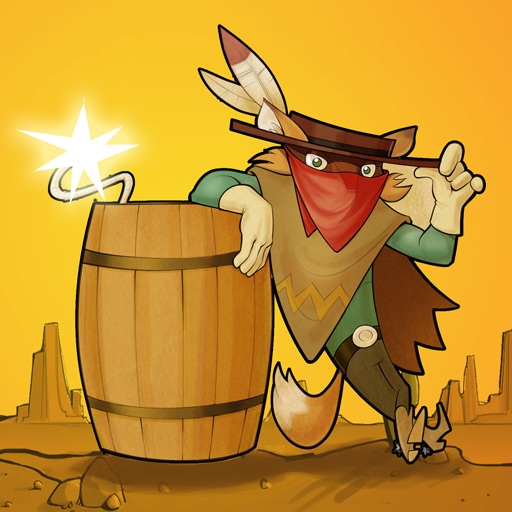 Play as Incendio, our hero, armed with your wits and a keg of gunpowder to liberate the town’s gold from the evil Boss Grimshaw in this explosive puzzle game!

150 levels of puzzles and mind-bending mayhem await as you blaze a gunpowder trail across the Wild West. Save the day using flaming wagons, Gatling guns, chandeliers, cannons, mine carts, and more! Burn your way through each puzzle and crack the safe with a cleverly placed powder keg!

Blow up all of Boss Grimshaw's piggy banks and race the clock to compete with friends as you work your way toward freeing the people's money from his greedy paws. But don’t underestimate Grimshaw's trickery. He isn't going to make this easy!

Download Gunpowder now, and blast your way to victory!

“Story of a hero trying to bring down the baddie told in such a classic cat-and-mouse way… Gunpowder will appeal to both fans of puzzle games and cartoons alike. 4½ out of 5!” -TouchArcade

"Thanks to such delightful visuals it feels like more of a breath of fresh air than usual" 4.5/5 - 148Apps